The influence of diets on health

Diets are made up of a variety of foods that may contain foods with components that can be both beneficial and harmful to health. Healthy and balanced diets should include not only adequate combinations and amounts of macronutrients and micronutrients, but also functional foods with nutraceutical properties, in order to benefit health by preventing, reversing and curing a large percentage of diseases. 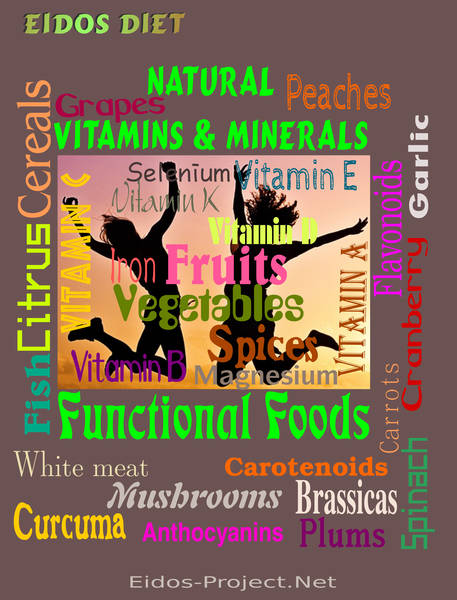 Diets are made up of a variety of foods, but the foods that make up a daily diet are not always all healthy. A diet may contain foods with components that can be both beneficial and harmful to health. For example, raw fruits and vegetables often contain nutrients and phytochemicals that benefit health, while foods such as potato chips, smoked foods and sausages contain substances such as acrylamide, nitrosamines and processed fats that are harmful to health.

In the year 400 B.C. Hippocrates said that health comes from the balance between food and exercise, an important concept that was unfortunately left out.

From the 17th century some diseases were related with the lack of certain foods in the diet, when was noticed that some diseases were cured with the intake of certain foods, or that diets composed of a certain foods, or certain diets, were responsible for causing serious health problems. For example, in the 17th century the Scottish physician James Lind found the solution to treat and cure scurvy by administering citrus juice to sailors who had contracted the disease during their long boat trips; similarly to scurvy, beriberi was a prevalent disease in the crews of the Japanese fleet, and in the early 20th century it was discovered that it was caused by a diet poor in brown rice and that an element present in rice bran extract was the solution; also in an experiment conducted using dogs in the early 20th century, the French physiologist Magendie demonstrated that a mono-diet of sugar was capable of causing serious health problems in the animals in a few weeks; also, the appearance of fast food chains that sell unhealthy foods such as junk food, started a global epidemic of obesity, with some associated diseases, which are now on the rise.

During the first half of the twentieth century many of the components present in foods that were capable of reversing and curing certain diseases, were isolated. In 1941, the first table of recommended dietary allowace (RDA) was published, including recommendations on protein, calcium, phosphorus, iron and specific vitamins. Today, as is well known, various nutrient tables referring to macronutrients and micronutrients - minerals and vitamins - are used to prevent, reverse and cure a large number of diseases.

By using functional foods with different nutraceutical properties, in the right combinations and amounts, it is possible to prevent, reverse and cure a wide range of diseases, such as cardiovascular diseases, diabetes, cholesterol, obesity and blood pressure, including certain types of cancer.

Based on new knowledge and scientific advances in the field of nutrition, we created the Eidos diet, that aims to benefit the health of those who want to have a healthy lifestyle.

The Eidos diet is a well balanced diet based on scientific foundations that besides taking into account the daily requirements of macro and micronutrients, emphasizes incorporating in the diet the largest amount of functional foods with nutraceutical properties to prevent, revert and cure effectively many diseases.

There is no doubt that the new nutrition science of this new era will be geared towards promoting healthy balanced diets that include not only adequate combinations and quantities of macronutrients and micronutrients, but will also promote the inclusion of functional molecules with nutraceutical properties with a view to benefiting health by preventing, reversing and curing a large percentage of diseases.

The starting point for good health